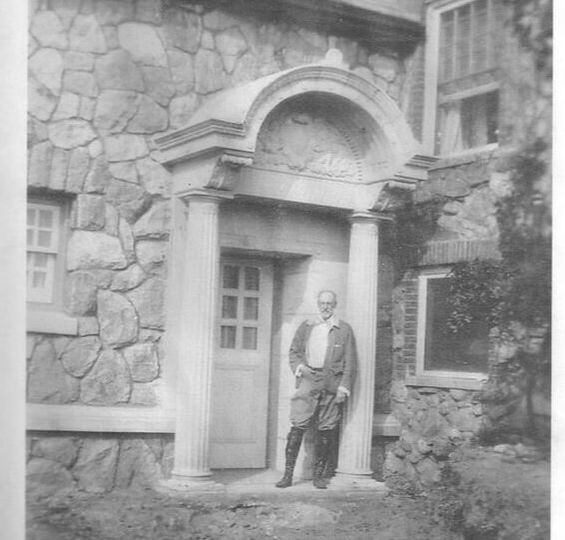 The mission of the Historical Society is to bring to life and help maintain the history of the Borough of Oakland by activating the Van Allen House site along with a restored Vygeberg Farm Office Building, where a museum will show living displays and memories of Oakland's past.  We encourage the participation of groups and individuals in sharing crafts and  the wisdom of our ancestors who survived the birth and growth of Oakland (a.k.a. The Dutch "Ponds" or native American"Yawpo") such as herb gardening, quilting, weaving, open-hearth cooking, ancestry recording, poetry, philosophy, music. sewing and many other useful talents.
We support the Borough's efforts to continue and complete the renovations of both buildings with the help of the Bergen County Office of Historic Preservation.
​
Edward Dey Page, 2nd Mayor of Oakland in 1906, and owner of The Vygeberg Farm, head-quartered at the Van Allen House and Stream House, is pictured here in front of his home, the Twilinge, which stood on Hiawatha Blvd in the early 1900's. This house was part of his 600+ acre estate where he ran a successful produce and dairy business that helped feed the expanding silk worker population in the Paterson textile district. He was a "Son of the American Revolution", coming from a family that had long supported American workers and their freedom to live full, productive lives. He had the Stream House built as a central office for his business, and a home for the office manager of the thriving dairy farm that his success in America's textile industry had allowed him to create. He employed many farmers as well as professional carpenters, stone masons and other craftsmen who helped create Oakland's first Fire House and many other public and private buildings in town.
Mr. Page employed many European immigrants from Italy (Mr. Scardo & family) and Holland(Gideon DeWitt) along with local artisans and workers. His additions to the town helped create the great town we live in today. Besides a fire house, he got the public school system started by planning for the school that today is the Board of Education Building by Valley School

The Oakland Historical Society was established in 1966 to preserve the Van Allen House, a Dutch stone house built in 1748 by the Van Allen Family. It stands at  the corner of Ramapo Valley Road (U.S. Route 202) and Franklin Ave in Oakland, New Jersey. The site is on the National Register of Historical Places especially because George Washington and his troops are documented to have stopped at the  house July 14, 1777 on the way to West Point during our War of Independence. A copy of a letter written by George Washington's hand at the house is available for viewing or for sale.

Donations support care of the Van Allen Site.  The Oakland Historical Society is a 501(c)3  organization, whereby donations are tax-deductible to the amount the law allows.  Volunteer work on the site and in the house is also appreciated.